My experience with NaNoWriMo

In this month of November, as is the tradition for several years (although I particularly only had discovered about it this year), happened the NaNoWriMo. Even though it’s called “national”, the event had been already international for quite some time. For the ones who doesn’t know about it, the idea is to write the first 50 thousand words of a novel in one month.

As we already approached the end, it’s not worth saying many thins about the event itself in here. I’ll do that next year, with some antecedence, because it always happens in November. However, it is worth to tell how was my experience in my first attempt. I learned some things that it’s good to remember for the rest of the year. I’ll list here what I had learned in this time I spent writing like crazy (I won—being “won” equivalent to achieve the 50 thousand words during the month—in the tenth day and finished draft with a little more than 80 thousand by the day 18, so yes, I really wrote a lot).

It may seem silly, but tracking the time to write and try to put the maximum words on the paper—be it physical or virtual—it’s a good and productive exercise. I told here some ways of surpassing the writer’s block, and this advice can be added to that list.

Using a chronometer, I realized that I’m able to push around a thousand words in forty minutes. Who’s used to typing know it is a not a good time, but at least now I know my rhythm and can try to improve it. Besides, I noticed it’s worth more to have shorter sessions of writing and some resting interval. Now I know that it helps my productivity to make forty minutes session and resting of twenty or thirty minutes.

The attempt to break the own record of word count is a thing that motivates to write and helps banishing our internal editor. Whatsoever useful the he might be in the revisions, this critical being only muddle us when the important is the creativity.

There are many simple desktop and smartphone applications that helps to track count (yes, cooking clocks can also be used). I warn that any attempt over forty minutes will be tiring and likely will reduce your productivity, but it’s worth to try and find your own limits.

Howsoever cliché this phrase might sound, it is totally true about this event. Along the month, it is usual to organize what are called “word wars” that consists in track who can write the most words in the same time. Like the solo chronometer, the will to win over a fast typist is something that helps to write nonstop. And in this competition, the one who puts a single word on the paper is already a winner—you advanced on your book’s creation, after all.

These small competitions (that are based on the honor system, and nobody needs to put the text anywhere to prove that they really wrote) help to narrow the bonds of the community and receiving incentives from other people to write more. Even though the writing is a lonely craft, some pushing always helps you to move forward. I resorted to the chat of the Brazilian’s event community many times when I got stuck and with no will to write. I’d like that this chat were active during the whole year.

Not to mention the fact that writing itself is already a reward. To officially win the NaNoWriMo, it’s needed to reach the 50 thousand words during the month, but any amount it’s something meritorious. If you go 20 thousand, don’t think it’s too little: it’s already much more than many people made (that including the people who simply didn’t do anything). The event is a personal achievement, so try to surpass yourself.

The first draft will always be awful

No matter how much of a perfectionist you are, the first version of a text is always terrible. If you try to come back and make amends, it’ll only delay the advance of the story. Even if it seems better, hardly will make you satisfied.

The NaNoWriMo idea is to turn off this internal editor who obligates us to keep changing past details and stop us from moving forward. Because of that, the main (unofficial) rule is: you can’t use the delete key (and not the even backspace, don’t try to use rhetoric on me). It is forbidden to erase words. Rewriting is valid if really necessary, but keep the old text there. Learn to control yourself and let the creative mood take over. Give some vacations to your internal editor and only let him come back when you finish the text. This is the solution to all the ones who could never finish the writing of a book, but also add a “don’t give up” to that rule.

It is good to collect the spoils

To see the purple bar with “Winner!” written over is better than it seems. It is nice to update the page covers on my social networks profiles with the winner banner (including the image in the sidebar of this very blog, which will be there for a while). I feel complete and satisfied for being able to win.

Besides, I can’t forget the fact that I finished a novel. I have a text of over 80 thousand words waiting for my revision. All I have to do is go back there and organize it all. The story is already told—and this is one of the hardest parts in the writing trade. Even for those who write as a hobby, it’s a great achievement to finish a book.

I thought for sometimes that I couldn’t do it. When I wrote my book at the middle of this year (which was the first on that I was able to finish), I had everything planned in advance. Even so, the writer’s block caught me well and I took 38 days to write the little more than 40 thousand words of the text.

For the NaNoWriMo, I wanted to plan myself well before the start. I wanted it hard, but I didn’t actually do much. During the month of October I procrastinated creating a map, kept hunting for articles about writing, besides doing anything that took me off the actual planning of my book. I achieve to make a synopsis of the story’s main thread, but it was so summarized that it barely helped me (except at the end, when I realized the climax was much better in the synopsis than what I ended up writing, so I went back and expanded the scene). At last, I didn’t know how the story would unfold and I thought this would be a problem. 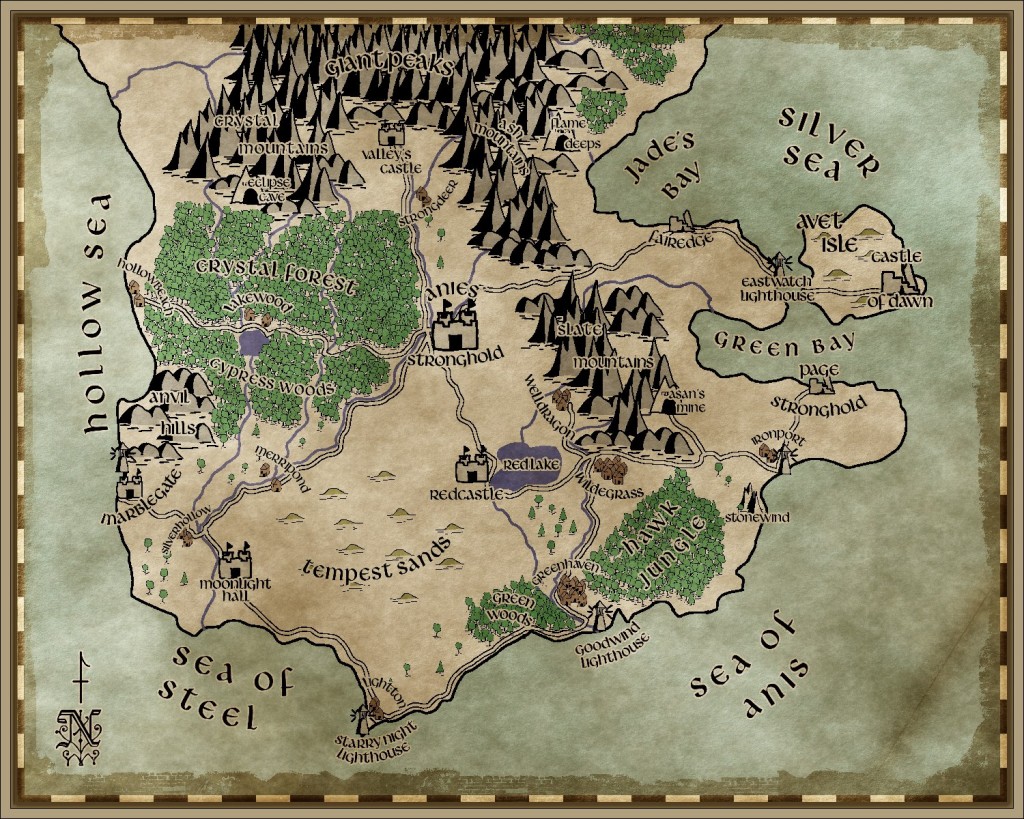 The map of Brightland Kingdom. It wasn’t such a useless procrastination after all.

It hasn’t been, no matter how weird it seemed to me. The details were popping up as I went writing, new threads appeared along with new characters and my protagonists went through trouble that I would never have imagined beforehand. It was a great experience to just sit down and write without worrying about the plan, because I had never thought it would ended up this way (all of my failed experiences were so because the lack of a plan).

So, if you think it is a daunting task and even impossible, stop thinking this way. Try it, at least once. It was a surprising experience for many people. Even if you don’t reach the 50 thousand words, any amount would make it worthy. It’s more than what you would have if you simply avoided or left for when you had more time. The event is already at the end, but it’s valid to plan for the next one and for the “camps”, that are informal versions of the event, though still maintained by the same organization, and they occur several times during the year.

I ended up discovering that I’m capable of making many things (more than I had thought) if I apply myself for real. This I should already know, but it’s good to prove it for myself.

At last, what matters is the personal challenge. So much that even the very NaNoWriMo doesn’t care that much if you actually wrote or not. If you cheated and pasted some random text there, the banner will show up for you. But the only real winners were the ones who tried.

This site uses Akismet to reduce spam. Learn how your comment data is processed.

George Marques' Blog by George Marques is licensed under a Creative Commons Attribution-ShareAlike 4.0 International License.
Permissions beyond the scope of this license may be available at http://georgemarques.com.br/contact.